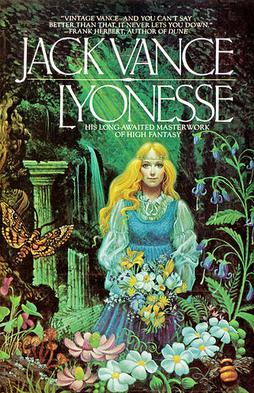 The Elder Isles, located in what is now the Bay of Biscay off the the coast of Old Gaul, are made up of ten contending kingdoms, all vying with each other for control. At the centre of much of the intrigue is Casmir, the ruthless and ambitious king of Lyonesse. His beautiful but otherworldly daughter, Suldrun, is part of his plans. He intends to cement an alliance or two by marrying her well. But Suldrun is as determined as he and defies him. Casmir coldly confines her to the overgrown garden that she loves to frequent, and it is here that meets her love and her tragedy unfolds. Political intrigue, magic, war, adventure and romance are interwoven in a rich and sweeping tale set in a brilliantly realized fabled land.

I'm very pleased to announce that we'll be reading this well-regarded fantasy trilogy by Jack Vance in December. The novel promises Jack's trademark humour, wonderful fantasy invention, and sesquipedalian vocabulary. And Jack Vance is the favourite author of no less than club icon and RPG gadabout, @clash_bowley , who once famously said "Nobody cares, Chris," so you know it's bound to be good!

Collaboration with the Design Mechanism
Some of you may have heard that this trilogy is about to be given an RPG treatment by The Design Mechanism. In light of this, I've asked my friend and GM-who-likes-to-verbally-abuse-me-in-character, Lawrence Whitaker if he would like to join us in discussing the book, and he has graciously agreed. Lawrence is co-owner of the Design Mechanism and one of the authors working on the project. And if we're lucky, one or two other members of the team will poke their nose in, too.
For the moment, we're only reading book 1 in the trilogy, but if there's a demand for it nothing prevents us from reading the other two in the months to follow.

Read this book before the end of December 2018 and we'll convene to discuss it on Wednesday, January 2nd.

By the way, if you'd like to hear a great podcast episode on this trilogy, I'll point to the wonderful Christmas 2016 episode of Fictoplasm. Also available on I-tunes.